Welcome To The Pittsburgh Viper Stars 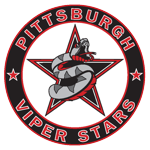 The program revived the Pittsburgh Viper Stars name and logo, which was previously associated with the organization’s Tier I (AAA) teams before they became Esmark Stars AAA Hockey six years ago.

Our mission as a Tier II (AA) select program is to provide a competitive learning atmosphere that is based on player development.  At Viper Stars players get a foundation of development that lets them strive to be their best.

The 2020 try-outs have been completed.  The Viper Stars are still looking for players with the birth year 2007 & 2006 to finalize those rosters.  Thank you everyone who attended, we look forward to a great season ahead.

Due to the uncertainty of the upcoming hockey season and Covid-19, the Vipers Stars have adjusted their season dues and game schedules.  The focus is to guarantee as much practice ice and home games as possible.  The adjusted schedule allows us to be flexible and keep our players on the ice with whatever circumstances are presented through out the season.

The updated Covid Budget is detailed below:

Thanks For Visiting... See You On The Ice!